A social cost is the expense to your personal reputation and/or your ability to engage, influence and negotiate. It’s oftentimes a consequence of our personal choices, but many times, it's the value others assign to us based on their own limited perceptions and paradigms.

I come from a long line of trailblazing women. My daughter is a college sophomore this year; the fifth, consecutive, generation of women in my family to be college-educated. My mother, who earned a master’s degree in special education, was also a fighter. I watched her march, chant, carry signs and chain herself to buildings in the 70s for more than one great cause.

She told me and my younger sister that we would always have to “fight” for ourselves, but that the fight would look different for us. “Instead of chaining yourselves to buildings,” she said, “You’ll walk through the front doors and go to school, live, and work where you choose. But always keep your eyes open,” she added, “And know your worth.”

Fast-forward a couple of decades.

Like many other inquiring minds in the mid-90s, I read a book by John Gray entitled, Men are from Mars, Women are from Venus. It was groundbreaking at the time to suggest that men and women are so different in the ways we perceive and communicate that we’re from completely different planets.

We all know that no two women and no two men are exactly the same. But when we can pinpoint and understand some basic differences between us, women can use this information to advance and lead.

I took on my first, “real” professional position as a corporate communications manager for a Wall Street-based company straight out of graduate school. At the same time, the company hired Michael* – a guy my same age with an undergraduate degree – as a marketing manager. As counterparts, we shared resources, including an administrative assistant, Samantha*, who handled our meeting and travel schedules, and provided critical clerical assistance on projects.

In meetings with the executive team – which included the CEO, vice presidents, assistant vice presidents, and me and Michael (the only two mid-level managers in the company), I would report on what Samantha and I had accomplished. While I worked with designers to conceptualize international advertising campaigns, Samantha developed a media contact list without the help of the internet, which would not become a household resource for a few years. When I spoke in these meetings, the room was still, everyone was engaged, and I received plenty of accolades.

Michael had an equal level of indispensable assistance from Samantha on his projects. When Michael presented, however, he never mentioned anyone other than himself. I managed to do this and that, he’d brag. He often inflated his achievements and deflected by speaking in a loud voice and, oftentimes, arguing with the higher-ups.

In a matter of three months, however, he was promoted to assistant vice president with a significant salary increase and a corner office overlooking the Hudson River. I became the only mid-level manager in the organization. Obviously, this was perplexing for me. I did more and better work than this guy; yet, he’d been rewarded.

I requested a meeting with the CEO to learn why I hadn’t been promoted. He told me he didn’t believe I fit the corporate culture because I was too aggressive. He stressed that he didn’t feel I had ever demonstrated rude or unprofessional behavior and then repeated with special emphasis: “You’re just too... aggressive.”

At that time – in my youth – I felt awful. I began questioning myself. Was I too in-your-face? Could this really be the reason I wasn’t promoted?

Years later, I easily call BS. Labeling women as “just too aggressive” is a passive-aggressive way of blocking us from leadership roles. The same assertive and confident behavior in men often results in promotion, as demonstrated in Michael’s case.

Several elements played out in this situation, aside from the fact that I was only one of two women at the “executive” level in an organization that was clearly a boy’s club.

Many professional women I know have been socialized to minimize public credit, and instead, to keep the peace and acknowledge the contributions of everyone who might be offended otherwise. Men generally are not socialized this way and are, instead, taught to compete for a single, alpha spot.

To be a great leader, however, you need to be strategic in doing both at the appropriate times – owning your shine and acknowledging the tribe.

Here are three things to remember in your efforts to influence and negotiate:

First, women and men are, indeed, fundamentally different in how we perceive and communicate. The differences are much more than genetic. It’s also about how we’re socialized and our environmental influences.

In my opinion, women have the upper hand here because we’re taught to value our intuition. Intuition, or the sixth sense, happens when the brain draws on past experiences and external cues in making decisions -- but it happens so fast that our reactions are at an unconscious level.

Additionally, the gut has neurotransmitters just like the brain that respond to environment and emotions in the present. When we feel “butterflies” in the stomach, we call it “gut instinct,” which also plays a large role in intuition.

However, our culture compares intuition and intellect and views intuition as a “touchy-feely concept.” So, boys are socialized to ignore it, and girls are encouraged to use it, e.g., women’s or mother’s intuition.

We’re building the engine while the jet is in flight.

Second, as my mother warned, this fight looks different in the new millennium. These waters are not fully charted. We have very few role models at the top with women making up only 5% of CEO positions in Fortune 500 companies. In fact, we’ll be losing three of our female CEOs in 2018, reducing the ratio to 4.4%, as HPE’s Meg Whitman, Avon’s Sheri McCoy, and Staples’ Shira Goodman have each announced that they are stepping down after the 3rd quarter. So, in terms of understanding how to lead successfully, we’re often building the engine while the jet is in flight. We need to identify our role models, study their careers, and research their lives for clues and cues to our success.

And, third, know your worth. It behooves us all to know exactly who we are – our abilities, strengths, passions, and challenges. In this manner, when we begin to question ourselves because of external influences or our own insecurities, we can pivot and face the mirror of truth we’ve created for ourselves, strike a power pose, then get out there and shine, advance, and lead. 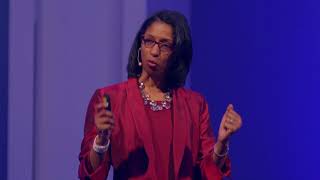